The word Orccha means hidden, and this quaint town lives up to its name and how. Rajasthan is synonymous with the most magnificent forts and palaces that travellers and tourists often miss visiting lesser known places such as Orccha in Madhya Pradesh. We were no different. We were unaware of this place until a tempting article about the fort at Orccha in a Jetwings magazine ( yes.. again!!) caught our eye. A photo very similar to the one we captured below, had us hooked on and we began planning our trip to this place.

The easiest way to reach Orccha from NCR is to take a train to Jhansi and then drive down from Jhansi to Orccha ( about 20 kms by road). Little did we know that the train we had booked – Gatiman express , would be covering a distance of 400 kms in 4 hours. The average speed of the train was 130 kmph and at one point the train was touching 160 kmph. Thanks to the speedometer app… I have proof of the same.

After a ‘gatiman’ journey which reached Jhansi on time only to be informed by our taxi driver that the bridge connecting Jhansi to Orccha was flooded and cannot be accessed. After a quick lunch in Jhansi, we took a by-pass route through a village to reach Orccha. The state of roads(if any) is questionable. We reached our resort without much drama and what a serene place it was – with a view of the famous ‘chattris’.

The resort itself was beautiful and displayed rajput influences in its layout and architecture. 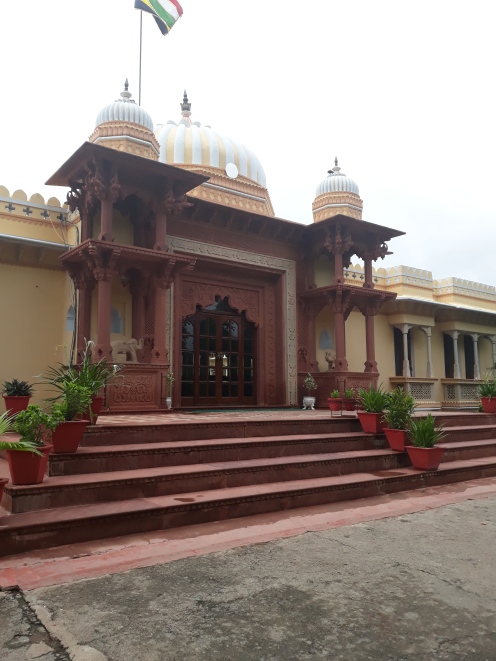 After checking in and relaxing for a bit, we decided to explore Orccha for what it was famous for – the Fort complex.

The entry to the complex is majestic and it houses – the Jahangir Palace, the Raja Mahal and Sheesh Mahal ( not accessible for tourists anymore).

Secret passages, steep staircases,exquisite murals on the walls and ceilings embellished with paintings made of vegetable dyes still remain a treat to the eyes.

The Jahangir Mahal was constructed in honour of the Mughal emperor Jahangir’s visit to the town. It was tastefully constructed by the valiant king Bir Singh Deo. It is a good amalgamation of  Mughal architecture and Bundela Rajput architecture.

The inverted lotus arches that adorn each entrance are a symbol of Rajput architecture, while the long hallways with several symmetrical pillars are a mark of Mughal architecture!

In it’s time the whole fort was said to have been painted in shades of blue- predominantly turqoise. Sadly, only a few small square centimeters of the paint remain today. 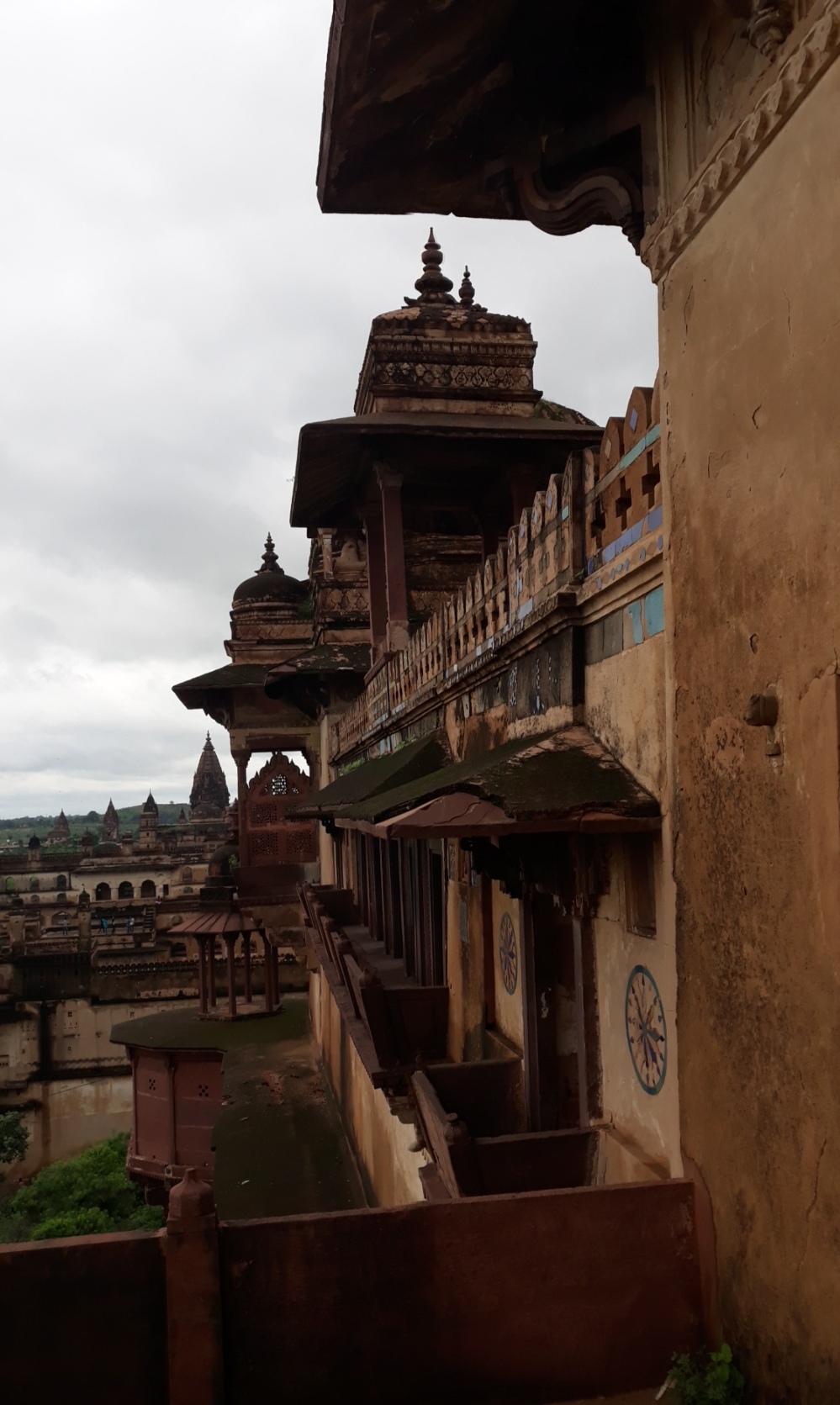 A sound and light show is organized each night where the Orccha fort acts as the backdrop. The effects are average and the audio is not very clear. However, it is a treat to see the lit up fort at night! 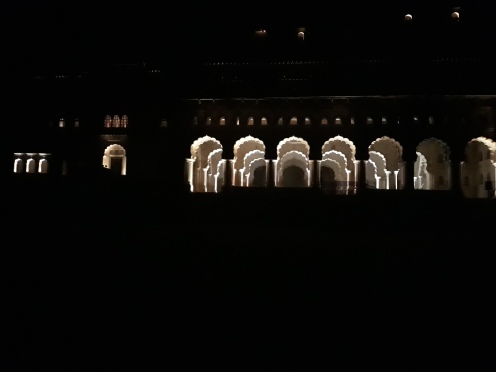 The town is situated on the banks of the river Betwa. White water rafting in this river is a must during the months apart from monsoon. Along the river lie 14 cenotaphs or chattris built for the rulers of Orccha. 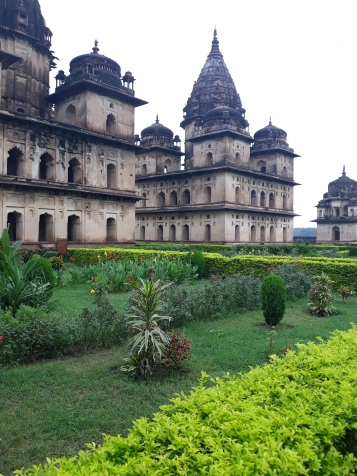 A walk across a cobbled bridge on the Betwa river gives a panoramic view of all the chattris. 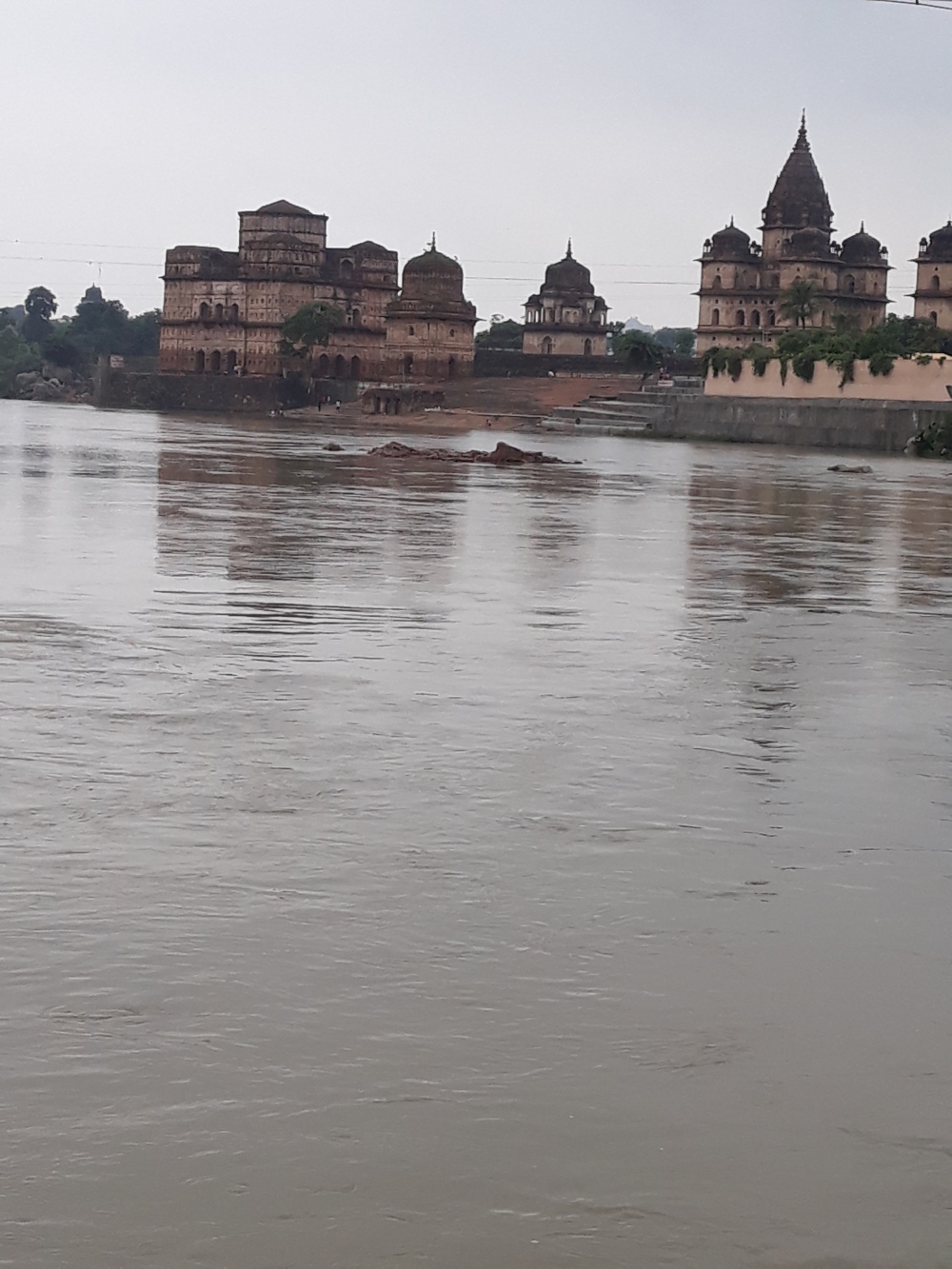 40 kms from Orccha on the Jhansi- Gwalior route is another town – Datia. The palace complex was built to mark Jahangir’s visit to the place. Fortunately or unfortunately, the visit did not take place and it still remains a mystery as to why no ruler ever lived in the Mahal.This palace also built by Bir Singh Deo, took 9 years to complete and is the only palace which had  7 floors.

Two floors are built underground – which acted as a living quarter for the army and an inventory of weapons for the army.The building is in the shape of a swastik and houses several courtyards and close to 440 rooms. There were 4 four corridors – one in each direction with 16 pillars each , which when put together recreate a chess board.

The main attraction of this palace is the 5 storey tower which is in the form of a dome ( mughal architecture ) atop which is a lotus shaped structure which symbolizes Bundela Architecture.

The stone lattice work and the murals that adorn the walls make us feel proud of the kind of heritage and culture we belong to. 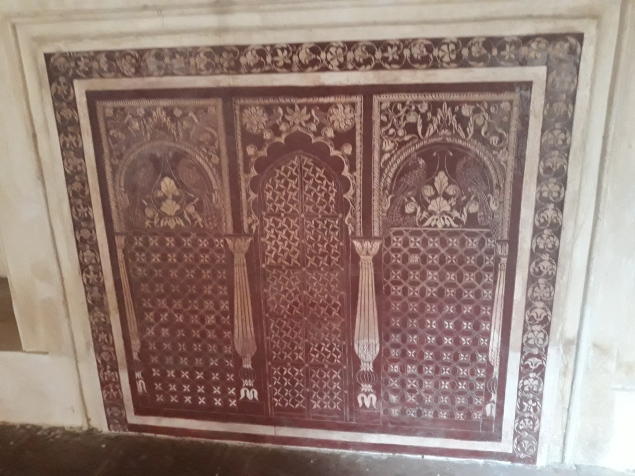 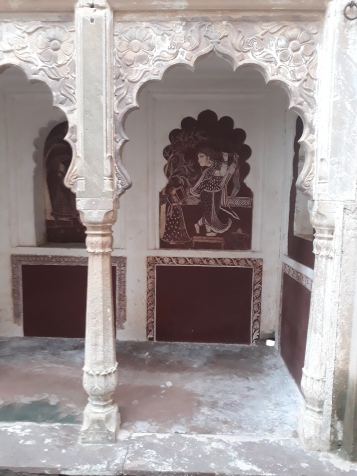 As we stepped out of this palace, there was just one thought  in my mind – some attention from the government , a lot of cleaning up and a little restoration would ensure that these palaces would stand majestic in its former glory!!